Not the kind of rational, in-my-head, calculating-the-risk, type of afraid.

Because of a sound coming up the Mountain, one I’d never heard.

It wasn’t a feeling I’d had in a long time; in fact, I can’t remember when. Certainly never here, at my home on the Mountain.

It was the night of Superstorm Sandy.

The wind had been steadily increasing all day, and had been raging and roaring for hours.

Late in the evening, we noticed a change in the sound. There was a strange vibration, too. Rhiannon, huddled in the dark with me, the dogs & cats, on my bed, was leaning against the wall, and said the whole house was vibrating.

In the kitchen, we both heard a strange wailing sound, as if a woman were keening. It is the season of Samhain, the Celtic New Year, which is the time when the doors between the worlds – this world and the realms of spirit – are most open. “Banshee,” or, in Gaelic, “Bean Sidhe” (Fairy Wife), came instantly to mind. Legend says the Banshee is the harbinger of death.

We stepped out onto our screened-in porch, only to be greeted by stinging, wind-driven, sleet, no matter how sheltered a position we took. Rhiannon only lasted a few moments in the raging wind.

But I stayed. Something felt decidedly different. Decidedly off.

I listened to the roaring winds, as I have countless times in the 11 years we have lived here. I wanted to understand what they were telling me.

They rage hard on our Mountain, at our home, when any storm front comes through – it’s the downside of living high on a west-facing ridge. The storms march across the wide Shenandoah Valley, spread out below, and run smack into us. Winds at our house are usually 10 to 20mph higher than down below, or even than they are on the other side of the Mountain.

As I listened, a deep rumble started in the Valley, and as it moved closer, grew in intensity.

For a moment, I thought of the sound that the occasional, low-flying, military helicopters on maneuvers make – there was the same thrumming, rumbling, vibration, with this new roar on top of the roar already raging.

But there could be no helicopters that night. The winds had to have been 70, maybe 80mph or more. They can’t fly in that.

As it got closer, it sounded, too, like a dozen freight trains were headed up the Mountain, the way their wheels rumble over the tracks, and the vibration, so low…

It washed over our ridge like a wave, this rumbling roar of wind, and the trees thrashed as never before.

Fear exploded in my belly, and my gut said to go inside immediately.

But I wanted to understand what was happening, so I stayed put, and lasted one more wave.

I listened to it build in the Valley below, rushing up through the trees as it made its way to us, and felt the vibration in my bones as the deafening roar & rumble washed over us.

Raw, naked, fear gripped me, filled my belly, and I bolted through the door, hearing the wailing cry of the Banshee as I did. I could not help myself.

I have never been afraid here like that before.

The screened-in porch is my domain, whether Spring, Summer, Fall or Winter, and in all weather. I visit it many times every day, work on carving there as energy allows, watch the seasons turn, and observe Mother Earth around me, day and night.

I have watched hundreds of thunderstorms march over our Mountain in the Summer, delighting in the play of lightning in the sky and the way the trees move with the wind.

I have sat for hours, well bundled, watching the play of thrashing trees against dark Winter nights when the winds raged around me.

Other North’easters and other hurricanes have come and gone and this Summer brought the startlement of the derecho winds.

And while others may be afraid of the woods at night, I delight in walking barefoot through them under the bright Full Moon.

But always, I have been in-my-head, calculating the risk, rationally deciding when it was time to go inside, for safety’s sake.

This storm was different, “…stitched together from elements natural and unnatural.” as author & founder of 350.org Bill McKibben put it (you can also read a transcript rather than the video at the first link).

Rationally, I think what I heard was the cold front coming in from the West and merging with Sandy’s rotation. That would explain the layers of wind, the differing directions they seemed to come from. And the Banshee’s cry was the wind whistling through the leaves.

But irrationally, all I can think of is those moments of primal, animal, instinctual, fear.

I’m not used to being afraid of Nature.

Nature is my everything, my element, despite the illness that keeps me confined to the house. Nature is what keeps me going.

I am constantly aware of what is happening outside, looking out through the large sliding glass doors in my bedroom, or in one of my many ventures onto the screened-in porch.

We live in an untended and wild Forest.

The trees I know well, in all seasons. I see them sway gently or thrash in the wind; bask in the golden glow of Fall color; watch for the first green tips to appear in Spring; thank them for their shade in Summer’s heat.

I love the giant and ancient Oak that lives on the North side of the house well – it lost many limbs in last Halloween’s freak snowstorm.

From my bed or from the porch, I observe the sky: the clouds, the many beautiful sunsets, and at night, the Moon & stars. I smile as the snow swirls and falls, and the mists & fogs close in. I listen to the birds, track their migrations, and follow the lives of the many deer and other wildlife.

While Sandy left our home undamaged, for which we are extremely grateful, she did leave a mark.

Our Forest, filled with trees that are tough, strong, and resiliant, tempered as they are by the many high winds we get from storms, shows Sandy’s mark here & there in twisted, dangling branches, and a few downed trees & branches. My favorite Fall-color tree, an Ash, lost a large primary branch. The beautiful Fall leaves have been largely stripped from the trees, a bit early, and carpet the Forest floor.

Yesterday, I saw one of the many deer who I have watched through the Summer, a youngster, appears to have a seriously injured ankle – swollen & with a bloody ring around it, as if it was trapped in something. I wonder if she ran in fear of the storm, and caught it between stones.

But it could have been so much worse.

Sandy has left her mark on me, as well.

I will not forget those moments of animal, instinctual, fear. They have renewed my sense of awe and respect for the force and power inherent in Mother Earth.

She is not to be taken lightly. 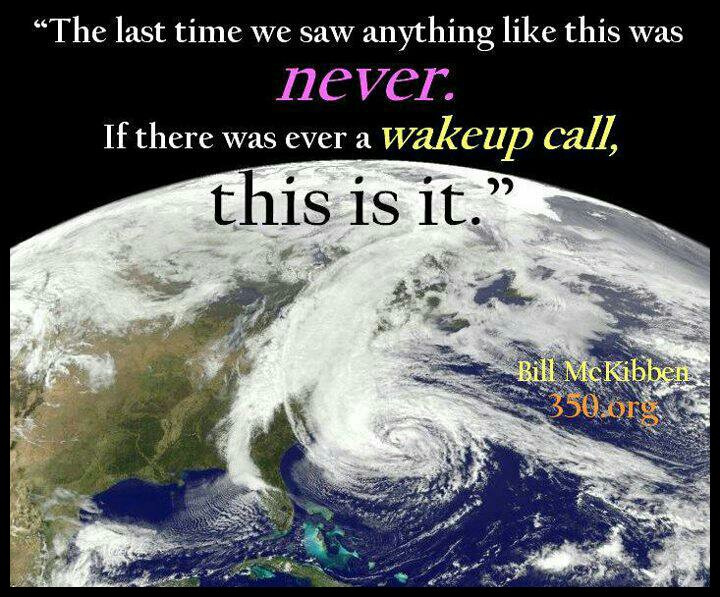